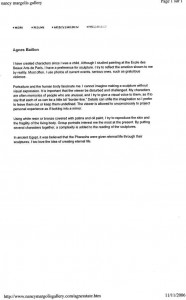 I have created characters since I was a child.

I studied painting at the Ecole des Beaux Arts de Paris, but now I have a preference for sculpture.

I do not have an intellectual process or an explanation of what I do, but I try to reflect the emotion shown to me by reality. I work most often from photos of current events, even serious ones such as gratuitous violence.

I am fascinated by portraiture and the human body. I cannot imagine making a sculpture without visual expression. It is important for me that the viewer be disturbed, questioned.

My characters are often memories of people who are unusual, and I try to give them a visual voice, as if to say that each of us can be a little bit “border-line”.

Details such as hair, like references to specific periods, can stifle the imagination of the viewer; I prefer to leave them out or not clearly defined, allowing the viewer to unconsciously project personal experience, as if looking into a mirror.

I love the idea of creating eternal life in sculpture, like in the time of the Pharaohs.

Using white resin, or combining patina and oil paint on bronze, I try to reproduce the skin and the fragility of the living body.

Group portraits are what interest me the most at present. Putting several characters together adds complexity to the reading of the sculpture.

One day a visitor at one of my exhibitions came up to me and said, “These are the vestiges of a pacifist civilization.” He hesitated, awaiting my approval or disagreement. I had never looked at things from that angle. In the end it is through the words of others that we really learn about ourselves.

Vestiges. Yes, my figures are memories or fragments of another age, bygone perhaps, though in reality an age that never existed. And pacifist, definitely. I am deeply and personally committed to the power of nonviolence. I grew up in a community devoted to the peaceful struggle for a fair and humane cause. All my life my upbringing has defined me, and I believe that now it’s my turn to fight for certain values. With sculpture. In silence and without shouting. Maybe I am drawing on the poetry and affection inherent in my work to remind people that humanity cannot survive without hope.

My current work focuses on the wounded body, though I find that the theme’s dramatic impact doesn’t go far enough. The wound is not enough. My wounded figures heal themselves. They harden themselves against the violence from the outside world. I want to believe that human beings can rise from the ashes. In creating these bodies that have a life of their own, I also take comfort in the idea of giving life to figures that will outlive us.

I remember the main character in Scorsese’s After Hours. In order to escape from an endless nightmare he is covered with plaster and then transformed into a sculpture. As if sculpture were the only way out. In my case, it is. Through sculpture I hint at what doesn’t always need to be said, expressed, or demanded. I try to communicate what is fundamental, the beauty of human nature, but without treating it as myth.